A remote Norwegian fjord has shown resilience—up to a point.

The view from Kongsfjorden, Svalbard, is endless snow-covered mountains and glassy, frigid water. You need to travel roughly 400 miles west from the remote Norwegian archipelago to reach the northeast coast of Greenland.

Kongsfjorden, home to one of the few human settlements on Svalbard, has been studied intensively. It’s a “natural laboratory” of Arctic climate change, one that has suggests that the ecosystems living in these icy water have so far managed a surprising amount of resilience in the face of rising temperatures, according to a paper in Nature Climate Change. But the long-term picture suggests a future that is probably not so rosy.

As the sea ice melts in the Arctic—which is warming substantially faster than the global average—the food webs living in these icy waters are in peril.

Food webs are huge, complex systems made up of tiny interactions. A small fish eats plankton, is eaten by a bigger fish, and the bigger fish gets eaten by a seabird; each of those species feeds, or is fed by, a huge range of other species. These large, complex systems can absorb some changes—but too many changes means the systems get thrown too far out of whack to recover. Instead, they will reach a new and potentially very different equilibrium.

The effect that climate change could have on Arctic food webs is dramatic. As it becomes easier for some species to survive and harder for others, an entire food web could collapse or be reshaped from the bottom up. This kind of “regime shift” in the Arctic ocean is an increasingly pressing concern.

A team of researchers in Tromsø and Svalbard used data on the food web in Kongsfjorden between 2004 and 2016 to build up a picture of how much the web changed over these years. To do this, the researchers sketched out a description of the core interactions that make up the food web. For instance, keystone species both feed on many other species and are fed on by plenty of predators, giving them a crucial central role; highly predated species feed just about everyone else, and omnivores happily eat their way through all levels of the food web. Each of these processes creates a different micro-pattern of interspecies interactions.

These core processes then jostle alongside each other to build the larger, more complex system of the overall food web. Putting together these puzzle pieces in a computational model allowed the researchers to sketch out the configurations that made up three different food webs—one providing an overall picture of the Arctic, one of the nearby Atlantic, and a year-on-year picture of the 161 species in Kongsfjorden.

This meant that the researchers could measure how much the Kongsfjorden food web changed year on year.

Things have not been superb. In 2006, Kongsfjorden’s food web took a severe knock, and system-wide resilience has been slightly negative ever since. But in the face of climate upheaval, the food web in Kongsfjorden managed to keep its central ecological processes running between 2004 and 2016.

The archipelago suffered another blow when huge volumes of warmer Atlantic water and species flowed into the Arctic. Between 2006 and 2008, this resulted in a 2°C increase in the mean winter temperature in Kongsfjorden, as well as a decrease in sea ice. The Atlantic species that arrived changed competition and predation pressures on the species in the Arctic.

So far, these shifts have been temporary and below the threshold that would wreck the complex balance Kongsfjorden. At no point has there been a regime shift—a complete reshuffling of the core processes that make up the wider food web. There’s been no loss of any key species or a loss of any of the essential components of the food web.

This resilience so far could mean that food webs will be able to adapt to climate change. But it’s important to consider what “resilience” means here. It doesn’t mean that everything is continuing just as it always was—it means that “core ecological processes” are sustained. That could still mean substantial loss of biodiversity, biomass, and other changes.

This historical data doesn’t say much about what will happen in future. The “Atlantification” of the fjord is ongoing, write the researchers: sea ice cover is continuing to decline, and warm Atlantic water and species continue to flow in. Some of this Atlantification could help, as highly predated species flood into the Arctic and help to maintain the higher levels of predators in the Arctic food web. But it could also cause a change in food quality, as some species are forced to eat less-calorific prey.

As the authors point out, the time period their study covered is very short—just 12 years. And it’s representative of only a certain segment of the overall trend of the climate crisis. The food web seems able to adapt and accommodate to a certain degree of change, but will this be able to continue indefinitely?

This is a difficult question to answer when it comes to something as complex as a food web. “Beyond considerations of who eats whom,” the authors write, the changes in these systems are “hard to predict.”

At this point, there are still refuges of cold water farther north and in the cold spots that lurk in fjords. But as warming continues, that won’t always be the case. “The polar refuges will shrink,” write the researchers, “and may then set up the system for a large-scale persistent collapse.” 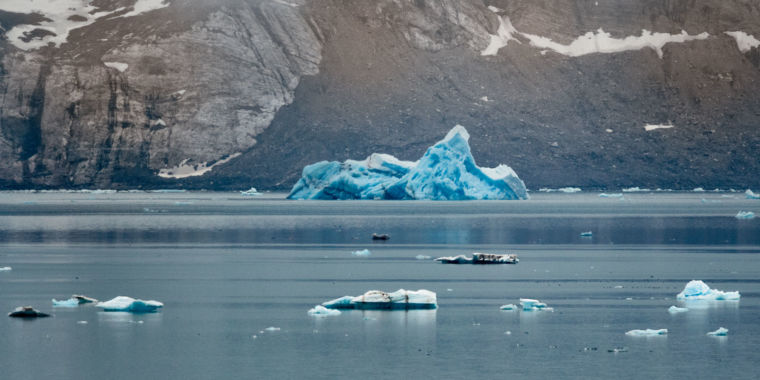