Childhood obesity: 4 servings of fish per week to fight it. It is the healthy recommendation to curb the worrying figures of the prevalence of overweight and obesity among the youngest. Fish that is part of our Mediterranean diet and whose consumption should increase, with 4 servings per week, and between one and three of them, bluefish.

Childhood obesity: 4 servings of fish per week to fight it. It is the healthy recommendation, included within the Week of Fish launched by the Ministry of Agriculture, Food and Environment, and with which you want to focus attention on a health problem of the first order, as the figures show. And the data has triggered the alarms, especially if we take into account that more than 1.3 million children are overweight and more than 600,000 obese. It is not the first time that doctors and specialists warn about the prevalence rates of obesity among the younger population. A problem that translates, according to the data provided on the occasion of the inauguration of the Week of Fish – an initiative of the Ministry of Agriculture, Food and Environment – in more than 1.3 million children and young people in our country who suffer from overweight and more than 600,000 with obesity problems. The causes? Also known by all, the lack of physical exercise and an imbalance in food. And it is precisely in the diet where we find a first ally to curb the worrying data. A diet that, as the experts point out, is a first-class asset, the Mediterranean diet, in which fish plays a prominent role.

Eating fish is fundamental because of its multiple benefits for our health. Fish that should be included in the diet four times a week, and in the case of the youngest, between 1 and 3 servings should be bluefish, rich in Omega 3 fatty acids. Acids that play an essential role in the protection of the cardiovascular system (cardiac function, blood pressure, triglyceride levels) as well as in the eye and neurological development of the youngest. It is not the only property that is attributed to bluefish, as they also help regulate cholesterol levels and protect the heart. For its part, white fish, lighter, also contains Omega 3 fatty acids, as well as proteins, mineral salts and low amounts of calories. 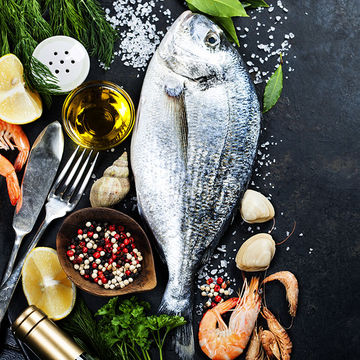 The Week of the Fish, an initiative directed to the infantile and youthful population, has as a priority objective to promote healthy habits and a balanced nutrition. Basic premises to combat the problems of overweight and childhood obesity, with a rate that exceeds 23.5%. Do not forget, as stressed by specialists, that obesity is the gateway to other health problems such as diabetes or cardiovascular disorders.

Through this initiative, students of Primary Education will not only have the opportunity to know the characteristics and benefits of fish in their diet, a food that is not always well received by children – something similar to what happens with the vegetables, which are more reluctant to eat them. The Week of Fish is accompanied by an exhibition that can be visited in the Ministry of Agriculture and that shows, through a panel tour, the characteristics of the fishing sector of our country (The corner of boats and fishing gear, The corner of the fish food, the corner of the fish market and the corner of the Aquaculture are the 4 areas of the sample). After your visit, students will have the opportunity to enjoy a healthy breakfast in which the fish will not be missing (minibocatas of tuna and sardines, for example, accompanied by juice and milk). The exhibition is not only aimed at schoolchildren but also at the rest of the public, from 16 to 18 this week.