At least 74 passengers have died after a train travelling between the Pakistani cities of Karachi to Rawalpindi caught fire.

Minister for Railways Sheikh Rashid Ahmed said the fire was caused by the explosion of a gas cylinder being used by passengers cooking breakfast.

The blaze is thought to have spread to at least three carriages.

According to officials cited in local media, many of the victims died as they tried to jump off the burning train.

Another 40 people have been injured. Officials say the number of dead may still rise.

The accident happened near the town of Rahim Yar Khan in the south of Punjab province.

Many passengers were pilgrims heading to Raiwind near Lahore for one of Pakistan’s largest annual religious congregations, organised by the Tablighi Jamaat Sunni Muslim missionary movement. The train was reportedly diverted to help these religious travellers.

Three carriages were set alight, officials said, with 54 people in the 11th carriage and 78 each in carriages 12 and 13. Most of these passengers were en route to the religious festival.

Mohammad Ramzan, who was on board, told BBC Urdu some pilgrims were making tea when their gas cylinder exploded. He jumped from the train to safety.

Survivor Jamshed Pathan told BBC Urdu he was in carriage 11 when they realised there was a fire just after they had finished morning prayers.

“There was chaos everywhere,” he said. “It was very difficult for us to get out and save ourselves.”

Another man, who gave his name as Ghaffar, said he could smell something in the night, “but no one paid attention”. He and his friends helped take the injured to hospital.

“I have no words to explain what we saw,” he said. “The rescue teams got there very late.”

District deputy commissioner Jamil Ahmed said some of the victims were so badly burnt they could not be identified, and DNA testing would be used to find out who had died.

What was the cause?

“Two cooking stoves blew up. They were cooking, they had [cooking] oil which added fuel to fire,” Sheikh Rashid Ahmed said.

Passengers bringing stoves onto trains in order to cook meals on long journeys was a common problem, the minister said. Though it is common to carry food on board, gas cylinders are banned.

But other reports from the scene suggest electrical problems could have been the cause. Several survivors have reportedly said they believed a short-circuit on board may have been to blame.

Prime Minister Imran Khan said he was “deeply saddened by the terrible tragedy”, adding that he had ordered an “immediate inquiry”.

After an earlier suspension in the wake of the fire, the railways minister said services have now been restored.

A crowded train prepped for a long journey

Train travel is one of the most popular means of transport in Pakistan, particularly among middle- and lower-income groups. Built by the British during pre-partition era, the railway tracks cover the length of the country.

However, while some of the upscale trains have dedicated dining carriages, most of the country’s trains are in poor condition and have barely functioning amenities. Therefore, passengers choose to bring things along with them or refresh themselves at the different railway stations where the trains stop.

They also take advantage of the fact that inspection is more relaxed than at airports, bringing banned items like cooking stoves and oil canisters to keep themselves sustained during the long hours on board.

This particular service – Tezgam – is one of the oldest and most popular, travelling between Karachi in the south and Rawalpindi in the north.

This is Pakistan’s worst rail disaster in over a decade.

The country has a history of fatal railway accidents. Casualty figures are often high because trains are packed with far greater numbers of passengers than they were designed for.

In July, 11 people died in an accident, with four dying in another accident in September.

And in 2005, more than 130 people were killed when three trains collided in Sindh province in one of the country’s worst train disasters.

Are you in the area? Have you been affected by the fire? If it is safe to do so, please share your experiences by emailing [email protected].

Please include a contact number if you are willing to speak to a BBC journalist. You can also contact us in the following ways: 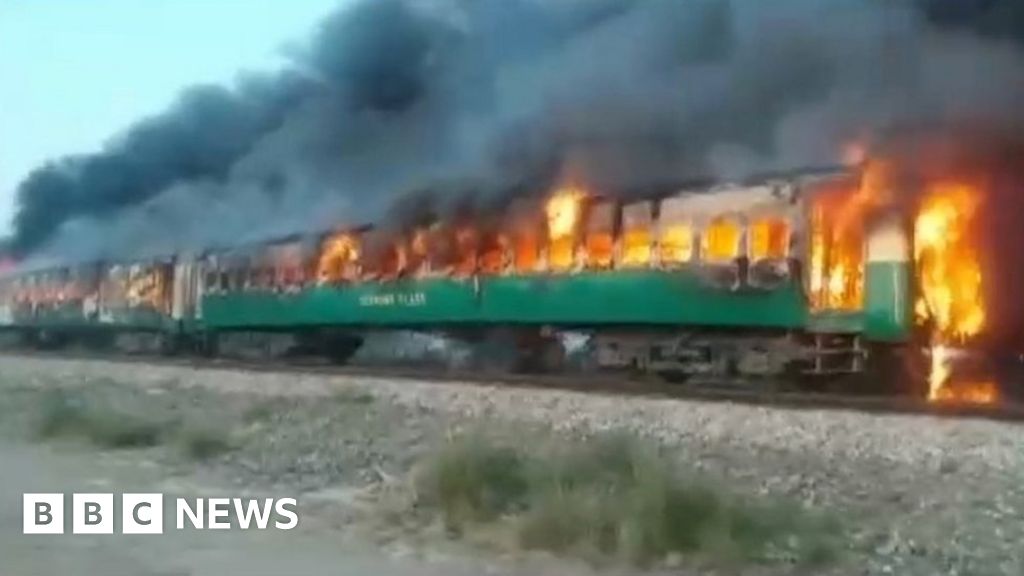